Producers suffering through the dry conditions are continuing to offload through the Dubbo saleyards, boosting numbers at both prime and store cattle sales.

Despite the bigger numbers, good lines of well-bred cattle have been offered including lines of quality Herefords from Albert and Nevertire vendors. 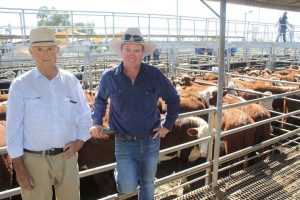 While a regular vendor of the Dubbo saleyards, Mr Radford said he wouldn’t usually sell these six to eight month old steers through the yards.
“We have had a little bit of rain in January and that’s it,” he said. Mr Radford said they would normally finish the steers and send to the feedlot however the cost of hay and grain didn’t make that viable in the current season.
“Sell the grain and sell the cattle – it’s worth more as money in the bank.”
The Radford’s line sold from $625 to $720/head and were purchased by buyers from Moree, Dubbo and Blackall, Queensland.