Numbers were up in both price and head yarded at last week’s Dubbo store cattle sale, with the forecast of a wet week on the horizon also boosting buyer confidence.

A total of 1890 cattle were offered- well above yarding numbers of previous store sales over the last couple of months.

Good numbers of cows and calves were on offer as breeders continue to offload due to dry conditions in the western areas. 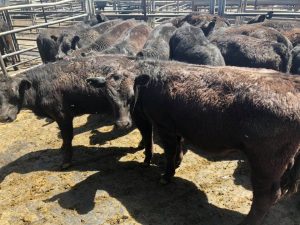 There was good competition for the quality cows and calves on offer. A line of first calving Angus heifers, with two- to four-month-old calves at foot, topped the sale for $1520/unit.

These were offered by Robert and Doreen Smith, Marrannoonbah Pty Ltd, Condobolin, who were reluctantly offloading some of their breeding stock due to the dry conditions. 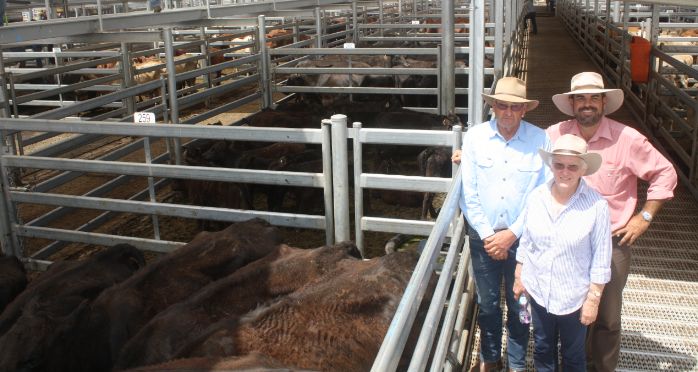 Robert and Doreen Smith, Marrannoonbah Pty Ltd, Condobolin and selling agent Martin Simmons, Elders, Dubbo with a line of 21×21 Angus heifers with first calves at foot sold at Friday’s Dubbo store cattle sale. The cows and two- to four-month-old calves made $1520/unit.
The Smith’s also offloaded some Santa Gertrudis cows with two to four-month-old calves by Brangus bulls for $800 and Angus/Santa-cross cows with calves of the same description for $850/unit.